The idea is very original, if no island to party we'll make a party. Magnificent detail are the sky lanterns of course that lift off from the island.

Some years later we have printed 1000 sky lanterns with the Bacardi logo, unfortunately we have never seen where they have been used for... 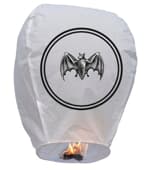